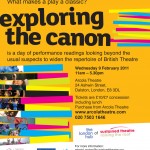 On Wednesday 9 February we are staging Exploring the Canon a day of performance readings aimed at putting forward a diverse range of plays that we believe should be included in the nation’s canon.  Click here for the Programme.

We want to broaden the repertoire of plays generally regarded as the nation’s classics to include plays that are often neglected for revival in the national theatre landscape.

Emerging theatre directors are being given a fantastic opportunity to direct extracts from plays which include Errol John’s Moon on a Rainbow Shawl, Shelley Silas’s Calcutta Kosher, Sudha Bhuchar’s The House of Bilquis Bibi, Wole Soyinka’s Death and the King’s Horseman and Michael Abbensetts Alterations.

Before each performance the Artistic Directors will champion their chosen play and give reasons why that play should be included within the canon.

A full day of performance readings (11am-5.30pm) with lunch thrown in allows time for spirited debate to take place between an audience of Artistic Directors, Directors, actors, drama schools, academics, arts journalists and lovers of theatre.

Tickets on sale from Arcola Theatre: £10/£7 concession (including lunch).  Contact Arcola on 020 7503 1646 and through their website www.arcolatheatre.com